25 Years in China: A Mission to Help People Stop Smoking

Hervey W. Gimbel ’55 and his wife Ann Gimbel, RN, MPH, first went to China in 1991 in an effort to improve the health status of the Chinese people. The trip was part of the China-USA Health Project, under the auspices of Health Services International, Inc. Since then, Dr. Gimbel has made 30 trips to China, and his wife, Ann, 17 trips. J.  Wayne McFarland ’39 accompanied the Gimbels on multiple occasions to help conduct stop smoking plans.

I served as medical director of the Smoke-Free Life residential stop smoking program at St. Helena Hospital for over 19 years and was invited by the Gimbels to accompany them on what was likely their farewell trip to multiple locations in China. The Gimbels, myself, and my daughter, Jamie, spent 17 days in China in the fall of 2016. The cities we visited included Shanghai, Wuhan, Beijing, and Hong Kong.

In Shanghai, our team met with professors from Fudan University to discuss opportunities to help deal with the epidemic of tobacco use in China. An estimated 315 million Chinese people smoke. Professor Pinpin Zheng, who is in charge of Tobacco Control at the university, expressed strong interest in QUIT RIGHT, a stop smoking app for smartphones. QUIT RIGHT was developed by myself and colleagues, including three of my children: Jonathan  Hodgkin (’18), Steven E. Hodgkin ’90, and Kathryn Glendrange, DVM, Esq. The app is currently being translated into the Chinese language. 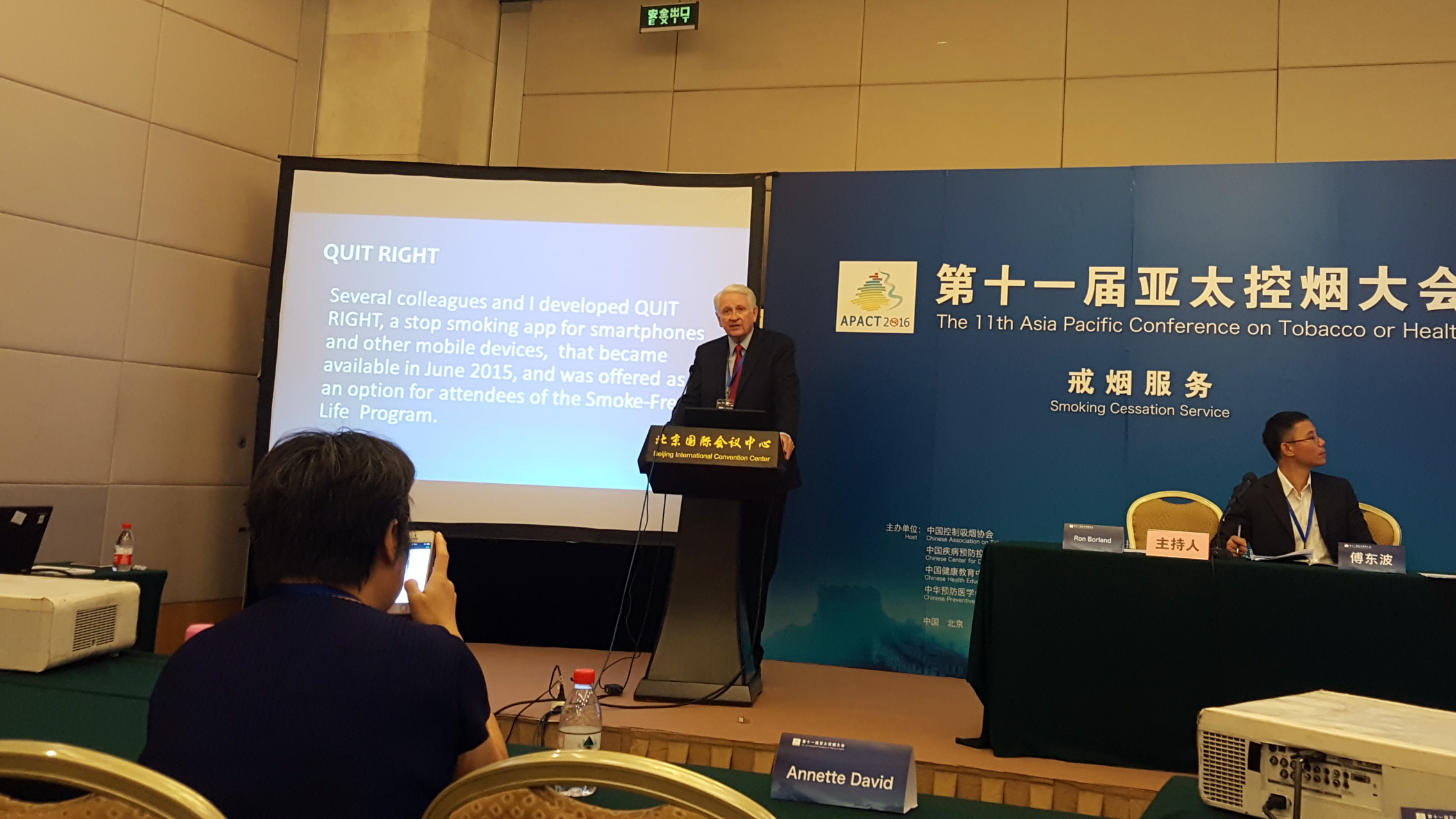 The next city on the itinerary was Beijing, where Dr. Gimbel presented a poster at the 11th Asia-Pacific Conference on Tobacco or Health demonstrating his organization’s strategies and successes in helping people in China stop smoking since 1991. I gave an oral presentation dealing with QUIT RIGHT, and the impressive success rates of the Smoke-Free Life residential stop smoking program.

Hong Kong was the final stop, where the Gimbels and I met with Robert Folkenberg, president of the China Union Mission of Seventh-day Adventists, and Barbara Choi, director of Health Affairs for the mission, to discuss strategies dealing with how the USA-China Health Project can continue to help with efforts to reduce tobacco use throughout China.

Dinners held to honor the Gimbels at each destination exemplified widely felt appreciation for their contributions to improving the nation’s health status. The many contacts the couple have kept over the decades also demonstrate the positive impact they have left on the Chinese people. Their work continues to produce fruit.

Plans for the future include collaborating with the China Union Mission to use QUIT RIGHT to help individuals stop smoking. Since there are an estimated 1.3 billion smartphone users in China, the potential benefit of using such an app to help smokers quit is significant.

Dr. Hodgkin served as medical director of the Smoke-Free Life program at St. Helena Hospital in St. Helena, California, for over 19 years. He was chief of the pulmonary section, department of internal medicine, at LLU School of Medicine from 1974 to 1980 and clinical professor of medicine, University of California, Davis, from 1983 to 2006. He currently lives with his wife, Jeanie, in Dana Point, California.
Share this post
Share on FacebookShare on Facebook TweetShare on Twitter Share on LinkedInShare on LinkedIn
Go to Top