A Life Serving by Faith 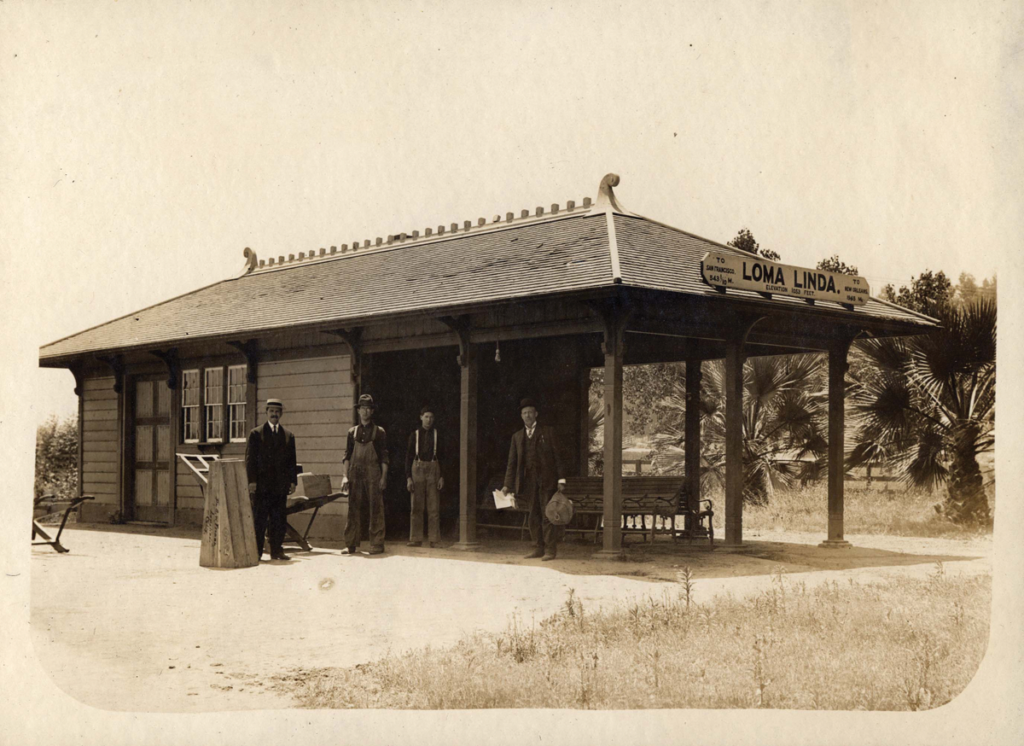 The photo above shows the Loma Linda railroad depot as it appeared shortly after 1909. The building stood until the 1950s when the rail lines opted out of the so-called milk-stop runs, as trollies and other forms of transportation were cutting into their customer base.

The well-dressed man standing at the left in the well-preserved photo above is Archibald W. Truman ’08-aff, 1908 graduate from the University of Colorado. Dr. and Mrs. Truman arrived in Loma Linda by train in 1909 with a determination to be of service at the newly founded College of Medical Evangelists. Upon entering the lobby of the sanitarium, they were greeted by Elder John Burden. In an interview, Dr. Truman recalled the awkward meeting: “When we introduced ourselves, he seemed surprised and asked, ‘Didn’t you get my letter not to come?’” Burden was referring to a letter he had sent replying to Dr. Truman’s request for employment.

There they were, standing in the very sanitarium where they had been impressed through “earnest prayer” to serve. The young physician and his wife, a registered nurse, had arrived with nothing more than faith. No doubt a feeling of desperation came over them as they contemplated their plight. They had $2 between them and no job prospects. A more immediate concern was lodging for the night. Elder John Burden “reluctantly” allowed the couple to stay in a guest room. The following day, prospects for work materialized. Dr. Truman recalled, “[T]he committee of which Burden was chairman took our application under advisement, and we were offered temporary employment. I was to be paid $18.50 a week and my wife 15 cents an hour!” The provisional employment lasted a career, serving the denomination at home and in the mission field. He found time to continue training at “Harvard, in Vienna, in Chicago, and other prestigious medical centers around the world, but these great institutions,” he lamented, “have nothing to teach us about health.”

In 1970, Dr. Truman was named an honored alumnus during APC. The physician who had no employment upon his arrival in Loma Linda in 1909 died in that little university town in 1977. “Dr. Truman was the last surviving member of the original faculty of Loma Linda University…. Besides serving the church as a physician in the United States and China, he was an ordained minister who served as General Conference medical secretary from 1922 to 1923 and 1928 to 1936 and as editor of Life and Health magazine from 1933 to 1941.” Throughout his career, Dr. Truman, a second cousin to the 43rd president of the United States, never wavered from the health message. Of the honors Dr. Truman received, son Roland commented, “I’m proud of the distinctions resting upon him, but my deepest satisfaction is my assurance that he is listed in the Lamb’s book of life.”