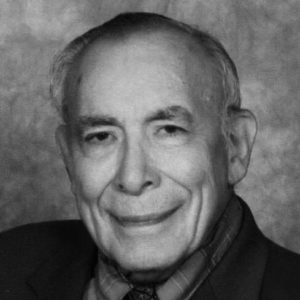 Alfred C. Hanscom ’53-B was born Feb. 17, 1926, and died July 1, 2021, at age 95. He spent his childhood in Chatham, New Hampshire, and graduated with high honors from Fryeburg Academy. His college years were interrupted by his service as a naval medic in World War II, from January 1945 until early 1946, in both the Pacific and Atlantic theaters. Following his return, he graduated from Atlantic Union College and went on to earn a medical degree from Loma Linda University in 1953.

On Nov. 22, 1951, he married Julianne Weaver. Over the next five decades, they lived in New Hampshire, California, Michigan, Tennessee, and North Carolina. He was board-certified in family practice, anesthesiology, internal medicine, and emergency medicine, and cared for countless numbers of patients during his nearly 50 years of practice. He was a skilled diagnostician and was well known for spending whatever time was needed for each and every one of his patients. He was a prolific reader, an adventurous traveler, and a remarkable conversationalist. Even with advanced age, his intellectual curiosity never dimmed. He was a lifelong and dedicated member of the Seventh-day Adventist Church and a strict vegetarian his entire life.

Dr. Hanscom’s wife died in 2007, after 56 years of marriage. In addition to her and his parents, he was predeceased by his brothers; S. Gordon Hanscom and Lieut. Argyle E. Hanscom, who was killed in World War II in 1944.