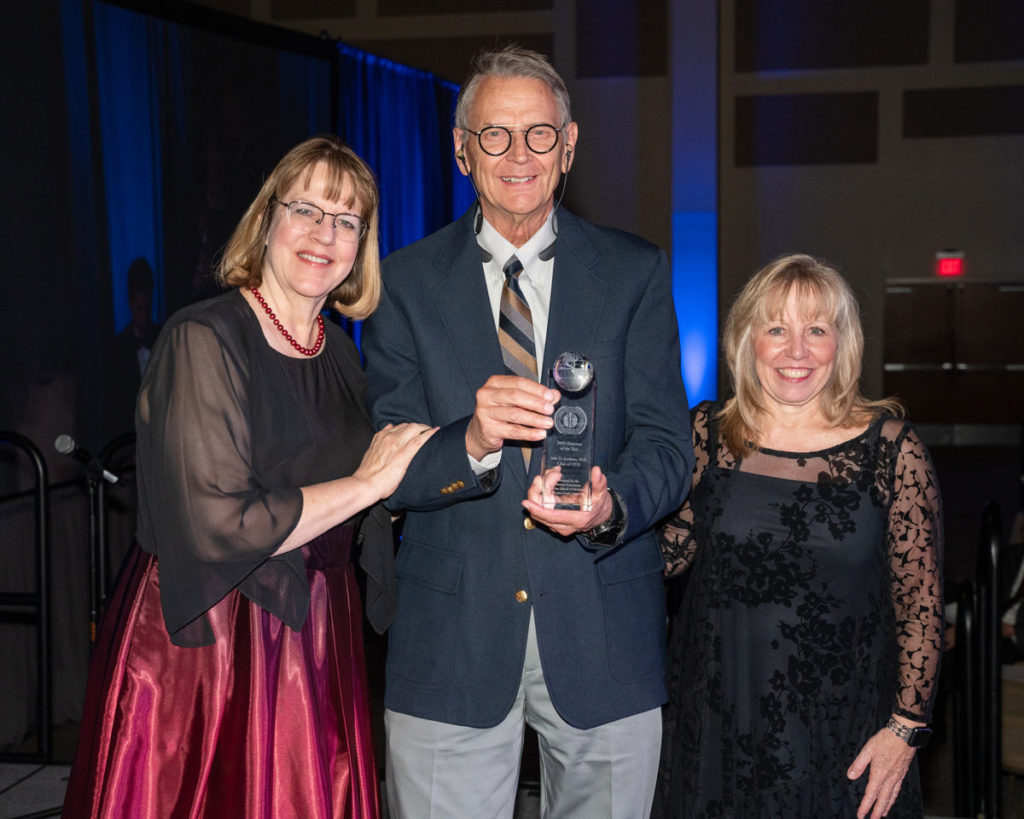 John D. Jacobson ’70, member of the honored 50th anniversary class of the School of Medicine, received the 2020 Alumnus of the Year award at the 88th Annual Postgraduate Convention Gala.

After completing medical school, Dr. Jacobson (also known as Jack) did a rotating internship at Sacred Heart Medical Center in Spokane, Washington. Mission work followed at Adventist Medical Center in Okinawa, Japan, from 1971 to 1976. During his time in Japan, he and his wife, Marlys, had their first daughter, Julienne Jacobson ’97, and later adopted two daughters, Jennie, who passed away in 1995, and Jerilyn. Since then, Dr. Jacobson has done relief work at the same Okinawa Hospital from 1976 to the present, about 30 times, up to four months some years. From 1976 to 1982, he practiced family medicine in a medically underserved area, Summerville, West Virginia, and was able to help start the first Seventh-day Adventist church there.

Dr. Jacobson continued his medical training by completing an obstetrics and gynecology residency at Loma Linda University (LLU) Medical Center, and he worked as a staff physician and professor for the department of obstetrics and gynecology (OB-GYN) for 33 years.  Among his accomplishments was the development of a computer program specific to the needs of the infertility department. He also served as chief financial officer of the OB-GYN department at LLU, has reviewed over 370 articles for an online CME site, was published in 40 peer-reviewed journals, and participated in 102 invited lectures and 14 resident lectures. Throughout his career, Dr. Jacobson received the Golden Apple Award, Most Valuable Attending Award, and twice received the Outstanding Attending Staff Physician Award. Also during his career at Loma Linda, his son, Jed, was born.

Dr. Jacobson met William C. Patton ’69 during medical school on the old outside basketball court down by the pool where they played together off and on over many years. Dr. Patton was delighted when Dr. Jacobson became an OB-GYN resident at LLU and stayed on to become a faculty member. Dr. Patton was in private practice for a while but rejoined the full-time faculty at LLU in 1994. They weren’t working directly together at first because Dr. Jacobson worked in Riverside doing gynecologic oncology under Alan King ’58, functioning as an oncologist. Dr. Jacobson performed many “first” LLU minimally invasive surgeries in gynecology and surgery (appendectomy, tubal surgery, oophorectomy, and ectopic pregnancy), mentored the urology staff, and was responsible for resident education in minimally invasive surgery for many years.

In 1995, Dr. Patton was alone in the reproductive endocrinology and infertility (REI) practice as in vitro fertilization (IVF) was becoming the predominate technology. Dr. King suggested that Dr. Jacobson become a member of the REI team, so he and Dr. Patton learned how to do IVF together, operated together, talked medicine, joked, and developed a complete infertility center. They discussed and developed protocols for patient care and then implemented the plans seamlessly so that patients and nurses saw complete consistency. Each brought unique skills to the practice.

When Dr. Patton became the OB-GYN chair, he asked Dr. Jacobson to be the section chief for reproductive endocrinology and infertility. Dr. Jacobson continued in that position until his retirement.

Past adventures of Dr. Jacobson include many snow skiing trips in Utah, a trip on the Alaska Marine Highway to Alaska, a visit to England and Scotland, and vacations in Hawaii and New Zealand. He has been a skipper of sailboats in New Zealand, the Caribbean, British Columbia, and southern California. Recent travel with Walk Japan included trails, ryokans, fixed ropes and chains, and spectacular scenery. His other interests outside of medicine include baseball, woodworking, bird-watching, scuba diving, and reading. Remote interests led to a pilot’s license and a ham radio license.

Ron Riter, who attended elementary school and Upper Columbia Academy (UCA) with Dr. Jacobson, shared a memory: “Jack’s parents were very nurturing. They would drive 100 miles one way whenever Jack did anything special at UCA — even when he just played basketball.”

Danny Campbell, who graduated from UCA with Dr. Jacobson, stated, “Jack was the best basketball player at UCA. One time during P.E., we were asked to throw a baseball as far as we could, and I thought I had a pretty good arm. However, when Jack threw it, it was like that spot in the Superman movie when young Clark Kent kicked a football in frustration — it almost went into orbit. Jack’s ball went way farther than all of the others.”

Robert E. Rentschler ’70 shared another memory: “Jack was (and remains) very bright. It always frustrated me how hard I had to study things that he could read once and retain more accurately than I could, even with all my studying. I can remember many evenings while intently studying in my freshman dorm room for a test the next day, I could see Jack walking to Gentry Gym for a basketball game with friends. In spite of his lesser time spent studying and relaxed attitude about big tests, he always scored at or near the top of our class.”

Dr. Jacobson and his friends love to keep in touch and talk about numerous subjects. He is highly regarded by his friends and colleagues, and he has distinguished himself in both his personal and professional pursuits.

Dr. Jacobson and Marlys currently reside in Riverside, California, and are often with their five (soon-to-be-six) grandchildren.

Dr. Knierim is a pathologist in Bellevue, Washington, and was a School of Medicine classmate of Dr. Jacobson. He was also one of this year’s honored alumni.