A few weeks ago while I was working in my office, I received a phone call from the customer service desk saying a couple had arrived in the lobby and they were waiting to see me. I heard the gentleman’s name mentioned, but it didn’t sound familiar. A minute later I was greeting the couple who had found a seat on one of the sofas in the lobby. The gentleman immediately introduced himself and commented that I probably wouldn’t remember him, and I didn’t. He didn’t even look vaguely familiar, which seemed strange because I usually recognize the faces of my former patients, even if I don’t remember who they are or when I’ve seen them. Without pausing, he proceeded to explain that he had come to our ER a little more than two years previously for alcohol detox. His wife had brought him to our hospital because she had heard good references about our services as an option for management of alcoholism. He was never admitted, only attended to in the ER (because he refused admission). After our interaction that day in the ER and my recommendation that he go to Alcoholics Anonymous (AA), he started attending AA meetings the very next day and has continued to do so ever  since. He has maintained his sobriety, and their lives were changed dramatically as a result.

Although we see this from time to time, it still amazes me to see the power of a simple invitation. When given in the appropriate time and setting, an invitation can be a powerful way to make a difference in someone’s life and make the world a better place. Considering this man’s case, the invitation to attend AA was very basic, nothing that special really, and yet it was instrumental in producing a decided change in his life. Why was this so? I think the answer can be found by looking at Jesus’ method of working.

As Ellen White says in “Ministry of Healing”: “Christ’s method alone will give true success in reaching the people. The Saviour mingled with men as one who desired their good. He showed His sympathy for them, ministered to their needs, and won their confidence. Then He bade them, ‘Follow Me.’”

The last sentence of this paragraph, “Then He bade them, ‘Follow Me,’” is an invitation. Jesus invited people to live a better life. Yet, these invitations were not isolated, stand-alone offers but rather a natural next step of His method after winning their confidence.

Looking at these steps one by one, we can see that the first part of Jesus’ method was to mingle with people, to get close to them, while showing genuine interest in them. Although the rapid adaptations in the last several months have given us more agility in connecting with seemingly anyone and everyone over the internet, mingling with people is not something we can do best while we stay within the comfort zone of our own homes. We have to go to where the people are, whether that means to another country or to the neighbor next door. We can’t make a difference in people’s lives without going to where they are. In our case, we chose to go to Honduras, one of the poorest countries of Central America, a country where corruption is so abundant, even within health care, that showing a genuine interest in people stands out in marked contrast against the common backdrop of selfish interests.

Our hospital in Honduras, Valle de Angeles Adventist Hospital (HAVA), was not doing well financially when we arrived. The hospital had been running in the red for years, possibly decades; no one even knew the last time income was equal to or greater than expenses. The hospital had many strong points—beautiful location, efficient floor plan, and caring staff—that together were very promising. One might consider just sending money. Yet, even if we had been given a million dollars to build a new wing on the hospital, what would that have accomplished for a hospital that was headed toward imminent closure? Though currently a new wing is needed due to the number of patients we must turn away, giving money for a new wing several years ago would not have solved the problem of dwindling patient numbers.

It was necessary for someone to go in person, to meet people where they were, and to address the needs directly. Thankfully, many have come to Honduras to make a difference directly in the towns and villages around the hospital and to help the hospital change its trajectory. These contributions give the hospital relevance in the community. It is not only a place where people’s needs are met but also a mobile ministry that regularly visits the surrounding towns and villages to meet people where they are.

The second part of Jesus’ method, “He showed His sympathy for them, ministered to their needs, and won their confidence,” marks the turning point of each encounter in winning people’s confidence. Ministering to people’s needs comes naturally within the health professions because they are service oriented. Ministering to people’s needs gives us a powerful tool to reach people’s hearts and demonstrate Jesus’ sympathy for them.

Finally, the third part of Jesus’ method of reaching people is to give them an invitation to follow Him. Naturally, anyone who has just had their needs met in a compassionate way will be happy to enjoy a similar experience again. This is where we have the opportunity to invite them to get even closer to the source of healing. Frequently, we invite our patients to come for a follow-up appointment, and they readily oblige, but we are too timid to invite them to take a step closer to Jesus and follow Him, to rise up a little higher in their human experience. We may ask them to drink more water or get more exercise, but we are afraid to ask people to read their Bibles, to pray, or to attend church. I imagine many of us worry about possible rejection of these invitations, as I used to. Fortunately, I’ve been able to learn from our hospital staff to give people invitations openly and regularly as part of the routine of life, and to trust God with the responses.

Here in the hospital, we have had (prior to the pandemic) the routine of inviting every patient to sing and pray with us as we go from room to room with Friday night singing bands. We also would invite every patient in the hospital, who could feasibly do so, to attend church with us each Sabbath. Some would go out of curiosity, others were genuinely interested and looking for a closer relationship with Jesus, and others may just have gone along for the ride, but almost none of them would have gone were it not for an invitation. 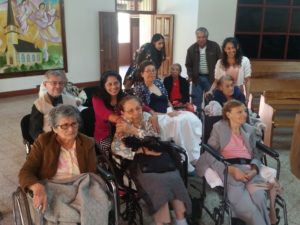 Patients who accepted an invitation from staff at Valle de Angeles Adventist Hospital join a Sabbath worship service at the nearby Seventh-day Adventist church.

On a typical Sabbath prior to the pandemic, roughly half the patients of our hospital would accompany us in church each week. Most of these patients were taken in wheelchairs for health reasons, and sometimes it took multiple trips to ferry them all down the hill to the church, about 200 yards from the hospital. The joy of seeing people get closer to God through music, prayer, and worship makes the minor investments of time and giving invitations well worth it.

In the case of the alcoholic patient who came to the hospital, by God’s grace and through the help of charitable contributions to Adventist Health International and Adventist Missions, I was able to be physically present in the ER the day he came in and to meet him where he was. By taking a little time to talk with him, sitting down beside his gurney, and showing concern for him, his confidence was won, and he accepted my invitation to attend AA. Later, when he came back to say thank you, he gladly accepted my gift of a “Recovery Edition Steps to Christ.” I am hopeful that he will continue in his new sobriety and continually grow in his relationship with Jesus now that he has been rescued from the trap of his addiction, an amazing transformation as a result of a simple invitation. Clearly, there is power in invitation, that, linked with the power of decision, results in turning points in one’s life.

God gives each of us the invitation to follow Him. It is our privilege to know God, spend time with Him, and enjoy the rewards of working closely with Him. As we team up with Him, He guides us in how to work efficiently and effectively. He rejoices with us in our successes and loves to fill us with satisfaction as we see His hand at work. Not only this, He invites us to offer invitations to others. He invites us today to step higher by inviting others to experience a better life. Will you put God’s method to the test? “Oh, taste and see that the Lord is good; Blessed is the man who trusts in Him!” Psalm 34:8 (NKJV).

Dr. Mundall and his wife, Jennifer, RN, DNP have been serving in Honduras since 2012. He has a passion for comprehensive city evangelism and enjoys making music and bird-watching in his free time.