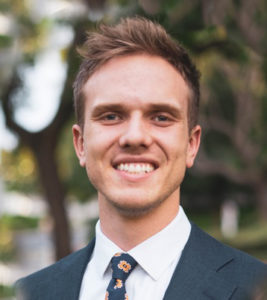 Third-year medical student Spencer J. Freed (’22) hopes to specialize in urology. When he graduates he will be a fourth-generation alumnus of the School of Medicine.

“Code blue, room 4202.” As we dashed out into the hallway I had to look at the back of my badge to remind myself what “code blue” meant—medical emergency. I was excited; this was the first code of my third year in medical school. I was nervous too; I didn’t want to get in the way and mess something up.

There were at least a dozen people present when we arrived. I couldn’t differentiate who was who. Physicians, PAs, and nurses all looked the same. Only one role was clear—the patient’s. At 54 years old, brain metastases a year prior had left her comatose. Yet here we were doing compressions. Why wasn’t she DNR? I would soon get some clues.

While fixated on this dance between coordination and chaos, I heard the voice of my resident snap me back to reality. “Spencer, you should get in line for compressions.” I was hesitant, I had just seen a nurse kick someone out of the rotation for weak compressions. I didn’t want to be humiliated too. But what could I do? I began. One, two, three, four. I felt a rib crack under my palm. “Woah, this isn’t a mannequin anymore,” I thought as I continued.

In the midst of my third round of compressions, the room fell strangely silent. A weeping young man in blue jeans and faded T-shirt entered the room, guided by a nurse. He rocked back and forth watching me pound on his mother’s chest again and again. Ten, eleven, twelve. I continued my compressions. Out of the corner of my eye, I saw him reach out his hand and place it on hers. It wasn’t there long. He began sobbing uncontrollably. Overwhelmed with grief, he collapsed in a nearby chair. Fifteen minutes later, she was pronounced dead.

As we walked back to the resident room, I couldn’t stop thinking about what I had just experienced. I couldn’t believe he chose to see his mother go through that. Why didn’t he make her DNR? CPR is brutal. Why try to keep her alive at this point? If she managed to survive our interventions, she was almost sure to die in the coming days or weeks.

I made my way home, struggling to make sense of what I had seen. I remembered a very simple concept from a first-year religion class: everyone dies differently. Each individual’s relationships and experiences leave a unique tear in the soul of both the dying and those who love them. To criticize the man’s response at the climax of his grief would not only have been inconsiderate but also a missed opportunity to learn from his distinctive grieving process.

I didn’t walk away that night with some life-changing lesson, per se. I was struck with the preciousness of life, the gravity of death, and the honor of being able to participate in the transition between the two. This was my only first time witnessing a death. Perhaps my emotions will become muted after more exposure, but I aspire to fight the slide into apathy that far too many physicians experience. Throughout my career, I hope to continue to grow in empathy, formulate my own understanding of what constitutes being alive versus living, and better learn how to guide others through their own path to wholeness, even in death.