According to current figures from the World Health Organization, the United States has about one doctor for every 385 inhabitants. Comparatively, in Malawi there is less than one doctor for every 63,000 inhabitants. Despite this fact, most Malawians have access to clinics and hospitals, though many are quite rudimentary. In fact, Malawi has seen significant progress in the fight against malaria, child and maternal mortality, tuberculosis, and HIV using a protocolized public health model where non-physician providers assess and treat patients with just a handful of pre-specified diagnoses and treatments. Unfortunately, this system is ill-equipped to manage patients with an unusual illness or complication.

My wife, Claire, and I moved to Malawi in 2016 after finishing residencies in family medicine and internal medicine, respectively. We joined Casey Graybill ’05 (obstetrics and gynecology) and Ryan A. Hayton ’05 (general surgery) at Malamulo Adventist Hospital and have since been joined by Wilson G. Thomas ’13 (pediatrics). We are among a handful of physicians and surgeons in southern Malawi with medical training beyond medical school and internship. God has brought us together, along with other strong and capable workers, to not only continue the successful public health model of care that has served Malawi well but also to provide the best possible care for those with unusual, complex, or otherwise easy-to-overlook conditions. To do this, we often stretch the boundaries of our own capabilities. One thing has had a big impact on our ability to care for complex patients: learning to perform ultrasound studies ourselves.

In June 2017, a group of well-dressed men showed up to our private ward as I was finishing patient rounds. They brought in a young 28-year-old woman lying on a stretcher. I will refer to this patient as Faith, although this is not her real name. One of the men accompanying her introduced himself as Faith’s pastor. He let me know that Faith had been suffering for over a year and that their church congregation had come together in prayer and raised enough funds to bring Faith to Malamulo Adventist Hospital after her condition had not improved despite multiple visits to Malawi’s largest central hospital.

About a year prior, Faith had suffered from a displaced fracture of her right femur and right humerus. The orthopedic department at the central hospital in Blantyre had performed a bone biopsy that showed no evidence of malignancy, and for unclear reasons, her workup and treatment had stopped there. At this point, Faith had been lying flat for almost a year, slowly losing muscle mass and range of motion in her joints. Now she had persistent severe pain throughout her bones, especially in the chest. Accompanying this pain, she reported severe stiffness in the joints as well as nausea, anorexia, constipation, and weight loss. She was HIV-negative with no other past medical history. Medicines included as needed paracetamol and ibuprofen. There was neither remarkable family history of TB exposure nor any report of substance use. Faith was single with a 14-year-old daughter and had worked as a housekeeper in Blantyre. 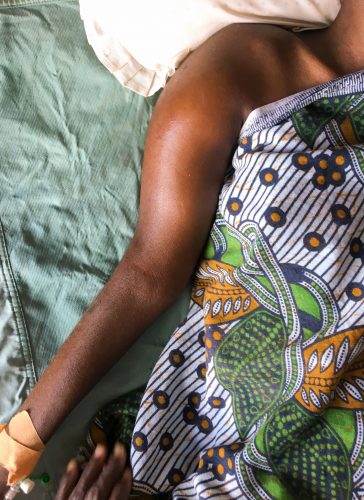 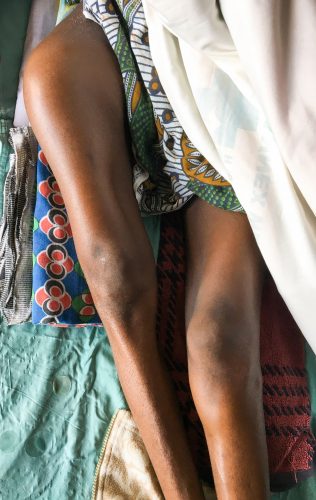 Vitals had been recorded, revealing a heart rate of 99 bpm, respiratory rate of 21 bpm, blood pressure of 100/70 mmHg, temperature of 37 degrees Celsius, and oxygen saturation of 96 percent without supplemental oxygen. Faith spoke softly and seemed to understand my English as she ignored the nurse’s translations and answered each question appropriately but in short one- or two-word responses. Most notable was her persistent smile despite her obvious discomfort and debilitation. She winced as I put my stethoscope on her fragile rib cage that moved up and down with her labored breaths as if it would soon cave in on itself. Heart sounds were regular with a 4/6 systolic murmur. There was no visible or palpable neck mass. The abdomen was flat, non-tender with firm palpable masses suspicious for focal stool and gas. The skin was pale, cool, and clammy, and her muscles and soft tissues had mostly wasted away. Assessing her extremities, I noted significant firm swelling of both the deformed right shoulder and humerus and the deformed right thigh (Figure 1). Except for her neck, jaw, and fingers, every joint was almost completely immobile. Otherwise, she was neurologically intact, and we found no sacral or other pressure ulcer. 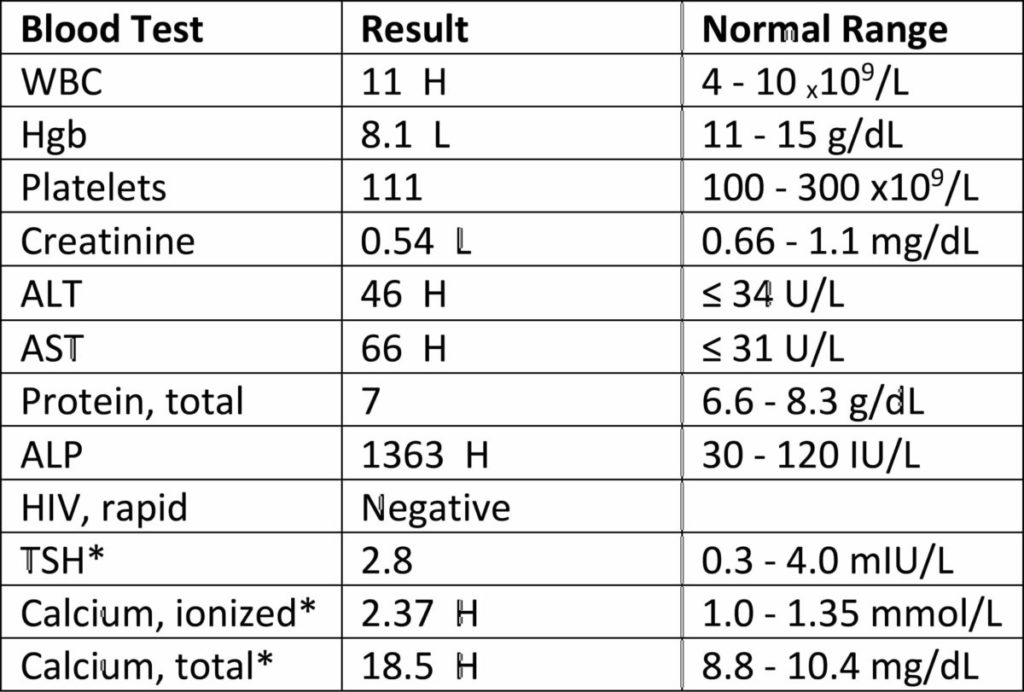 Table 1. Initial blood test results.
*TSH and calcium were performed at the Malawi College of Medicine Lab in Blantyre and became available on the third day after presentation.

X-rays from a year prior showed a shortened, angulated midshaft fracture of the right humerus with diffuse calcium deposits in the tissue surrounding the fracture and glenohumeral joint. Point-of-care ultrasound showed grossly normal heart chambers and valve function with a small inferior vena cava, no hepatosplenomegaly, no lesions in the liver, no bile duct or portal vein dilation, no periaortic lymphadenopathy, and no fluid collections. Table 1 summarizes her initial laboratory testing.

We gave her IV fluids and oral medicine to improve her pain and constipation. A few days passed as we waited for the serum calcium result, which had to be processed in Blantyre since Malamulo had no way to do any electrolyte testing at the time.

After confirming the hypercalcemia, our differential diagnosis for Faith’s condition included 1) osteitis fibrosa cystica due to untreated primary hyperparathyroidism, 2) malignancy, including multiple myeloma, or 3) chronic infection, including tuberculosis or histoplasmosis. Chronic infection or malignancy seemed less likely than primary hyperparathyroidism given Faith’s relative stability for many months and an absence of more specific findings to suggest malignancy or granulomatous disease, such as lymphadenopathy, fluid collections, soft-tissue masses, or pulmonary symptoms. 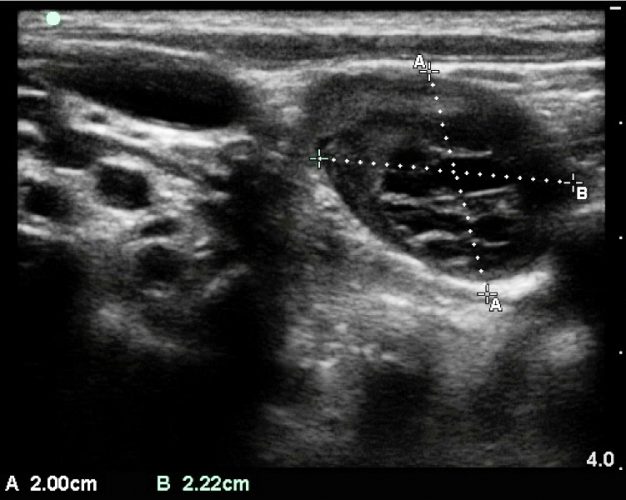 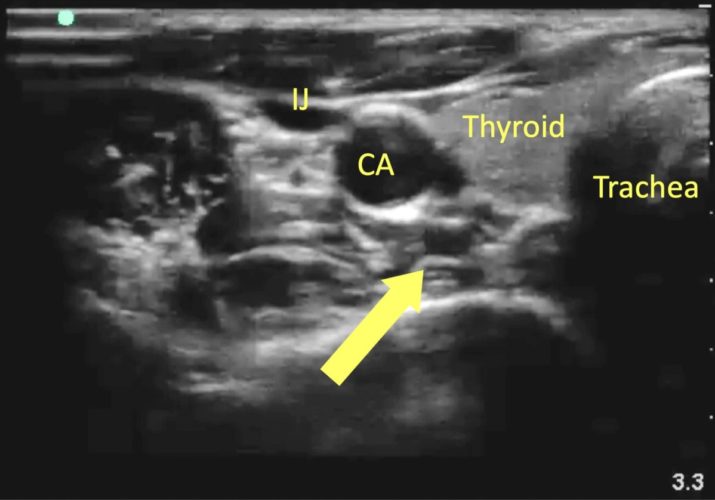 Figure 2. Ultrasound images of parathyroid adenoma. The image on the right in the transverse plane shows the location of this mass (large arrow) relative to other neck structures, such as the carotid artery (CA) and internal jugular vein (IJ).

Unfortunately, there is no endocrinologist in Malawi, nor can we measure parathyroid hormone levels without taking a blood sample to South Africa. Therefore, I figured that the best-case scenario would be if we could find a single obvious parathyroid adenoma and remove it. After reviewing an ultrasound textbook, I looked myself for any obvious lesions. Her thyroid appeared normal and homogenous, but as she swallowed, a round 2×2 cm cystic mass moved up and into view from just below the right sternoclavicular joint and inferior to the right lobe of the thyroid (Figure 2). I repeated this ultrasound in the presence of our surgeons, who agreed to do an empiric resection of this lesion. If this was the culprit parathyroid adenoma, we expected to see a dramatic drop in serum calcium postoperatively.

Two days after an uncomplicated surgical resection of this small mass, we finally received the first postoperative calcium result. In less than a day after the operation, her total calcium had dropped from 12.9 to 9.6 mg/dL. Despite quickly starting calcium and Vitamin D supplements, the patient still soon developed tingling and numbness on the face and hands. However, these symptoms improved, and her calcium levels stabilized with a daily dose of 12 grams of calcium carbonate and 5000 IU of Vitamin D3. Quickly, Faith’s pain and constipation improved, and she began to work hard to get her joints moving again. A week later, the pathology report confirmed that the tissue removed was indeed a parathyroid adenoma.

Figure 3. Follow-up X-rays. The left image shows the patient’s healed and deformed right humerus, and the image on the right shows her healed, shortened, and angulated right femur. 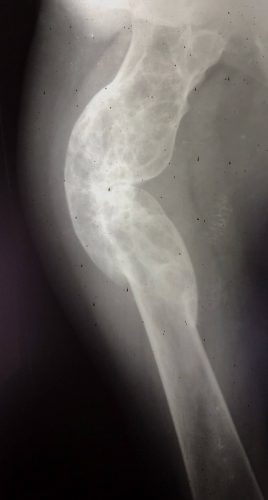 Figure 3. Follow-up X-rays. The left image shows the patient’s healed and deformed right humerus, and the image on the right shows her healed, shortened, and angulated right femur.

It took about two years to slowly get Faith off the high-dose calcium supplements. She now has good function in her joints and is thankful to God and to those that helped bring her to Malamulo Hospital. Figure 3 shows the persistent bony deformities of her right arm and right leg. She now walks with a walker and a shoe lift.

This case reveals an interesting and unexpected way in which we were able to use our ultrasound machine and other resources despite significant limitations in this low-resource setting. I am pleased to report that as a result of a donation through the LLUSM Alumni Association in 2017, Malamulo Hospital now has an electrolyte analyzer, and we can quickly and economically measure potassium, sodium, chloride, and calcium. This has made a real impact on patient care.