ORU CLOSES
I learned of my late acceptance to medical school at Oral Roberts University (ORU) in 1988 when the admissions office mistakenly called the radio show where I worked. When I called my family, they had already heard the news by radio! Two days later I joined nearly 40 Christian medical students in Tulsa, Oklahoma, having missed four weeks of orientation and the first two weeks of medical school.

Six weeks into my second year, after studying all night, I skipped the weekly chapel meeting for a much needed nap. Afterwards my roommate, William P. Baugh ’92, told me during chapel they announced ORU, millions in debt, would close the medical school after the 1989–90 school year. In disbelief, I exclaimed I should have known better than to skip chapel to nap!

Scrambling to apply to other medical schools, our shock worsened as the Liaison Committee for Medical Education (LCME) pronounced ORU closed immediately. If we didn’t find an alternative school within days we would be shut out of medical school entirely, while still owing loans. As students frantically called their home state schools, Loma Linda University (LLU) representatives Drs. B. Lyn Behrens ’63-aff, dean of medicine, William M. Hooker, PhD, associate dean for student affairs, John Kerbs, PhD, associate dean of admissions, and Bart Rippon, PhD, graduate school dean, flew in to interview over a hundred students, residents, and faculty. Their mission was to show genuine Christian care and to come to our aid.

According to Leonard S. Werner ’81-res, the admission criteria applied to ORU candidates included any connection to California, their spiritual background, and academic qualifications. A list of students accepted for transfer was released, and while the LLU representatives conducted their interviews, the names of additional transferees were posted daily. Anxious students, like me, prayed hard, knowing Loma Linda was our only hope. Romans 8:28 (NIV) encouraged me, “We know that in all things God works for the good of those who love Him, who have been called according to His purpose.”

Behind the scenes, a complex series of events saved the ORU students. LLU had recently sought LCME approval to increase enrollment. However, with California medical schools at full capacity this process moved slowly. Unknown to us then, after ORU’s closure LCME not only granted approval but implored LLU and other medical schools to accept as many ORU students as possible. Had LLU expanded previously, there would have been no capacity to rescue the ORU students.

With foresight, Dr. Behrens realized the influx of students might concern the second-year class as they prepared for national exams. A member of the LLU second-year class, Julio Narvaez ’92, remembers before she flew to Tulsa, Dr. Behrens compassionately explained the ORU crisis and asked the sophomores to vote on adding transferees. His class held the transfer students’ fates in their hands and, thankfully, voted to welcome the new students to the class of 1992.

The LLU deans tirelessly interviewed students in groups of two or three. Dr. Hooker said, “It was like missionary work,” recalling an interview with three students, where one literally sat on the floor. Not surprisingly, that student was me! In my excitement I didn’t hesitate to jump on the floor for a chance to speak to the deans. Dr. Hooker shared he was struck by the high percentage of spiritually-oriented students they met at ORU, perfectly fitting the ideal LLU profile. Forty-five ORU students transferred to LLU: 19 freshmen, 12 sophomores, and 14 juniors. Edward F. Goljan, MD, an ORU pathology professor, transferred as well and was immensely popular during his brief tenure at LLU. Loma Linda’s quest to maximize medical enrollment had succeeded in one week, filling the school to maximum capacity. 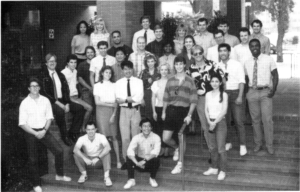 STORIES OF THE TRANSFER
In the chaos God was leading. Martin F. Waldron ’92, quickly accepted for transfer to LLU, was so excited to return home to California he backed his moving truck into the ORU housing gate! Most of us had only a few boxes of clothes and books and drove in caravans to other states. One ORU classmate, Nick Cardinale, MD, sold his ailing car and rode with two other transfer students to Kansas University. Despite a naval scholarship, Nick slept on his floor the next six months and noted as a transfer student he always felt like an outsider. In contrast, our origins as transfer students quickly vanished when we became part of the LLU family.

Second-year student, Thomas K. Mogensen ’92, was accepted at several transfer schools. He chose Loma Linda for two reasons: his wife’s family was from the area, but most importantly he appreciated the whole-person emphasis on a Christian campus. When they arrived, Tom and his wife slept in their moving truck for a week before finding housing.

One example of faith is that of Paul S. Dagher ’93, from Beirut. He was newly married and facing stiff competition among international students when he started at ORU in 1989. Having just furnished their apartment, he felt led to prepare his family to move yet again, even before interviewing for LLU. Some ORU students saw this preparation as lacking faith, hoping ORU might remain open. With no small trucks available in town, Paul rented the largest one. Days later he offered fellow transfer students the extra space to pack their belongings for the journey to California, perfectly meeting the needs of many friends.

Our caravan drove straight through for over 20 hours, reaching San Bernardino on Sunday, Sept. 24, 1989. That same day at a welcome barbeque mixer, exhausted from travel, we were eager for a grilled hamburger or hot dog. I was not the only one confused as we watched hot dogs being pulled from a can! I learned that vegetarian hot dogs weren’t for me, but later at White Memorial Hospital, I came to enjoy my nightly Stripple-lettuce-tomato sandwich, and my wife and I still love Stripples today.

In preparation for our arrival, local Seventh-day Adventist churches collected donations of furniture and household items for transfer students. Rolanda R. Everett ’92 recalls her family donated a few beds to the cause, and Dr. Hooker gave me a waterbed that lasted through residency. Loma Linda generously gave each of us $1,000 for books and other needs. Residents, students, and attendings offered us temporary housing. Lawrence D. Longo ’54 graciously offered me his carriage house until I found an apartment.

ADJUSTING TO LLU
Adjusting to the LLU curriculum was difficult for us all, but especially the second-year students. We were one course ahead, but missed first-year classes of microbiology, examination, and whole-person care. We did evening and weekend classes to catch up and had the stress of reapplying for financial aid and transferring loans. Resilient transferee Kathy M. Anderson ’92 had two children during medical school and managed to only miss one day of classes, graduating second in her class.

Dr. Hooker offered free group therapy sessions to help us cope with the sudden changes. Knowing I would train in psychiatry, he took me under his wing in friendship. For nearly a dozen years, I had the pleasure of occasionally sharing lunch with my friend and mentor at our favorite Italian place.

Having worked as a rescue EMT, I was crushed to learn I missed ER rotations. Kathleen J. Clem ’89, an ER attending, went the extra mile for me. She signed me as an ER volunteer and personally taught me on nights and weekends around my other rotations. For months I happily drew blood, started IVs, and sutured wounds. When my classmate, Richard G. Williams ’92, and I accompanied Richard H. Hart ’70 on weekend mission trips to Mexico, the hours in the ER paid off. I saw that again the Lord provided the exact training I needed to treat those patients. Today, my LLU volunteer service pin reminds me of my gratitude, which cannot be measured in words, to Dr. Clem, Dr. Hart, and all those who taught me.

I was deeply impacted by whole-person medicine classes taught by Wil Alexander, PhD. One night, in front of 50 students, you could’ve heard a pin drop while Dr. Alexander interviewed a 20-year-old girl after a liver transplant. She shared raw emotions, physical scars, and future fears, both of trauma and joy after a major life-saving operation. We were shown how to practically apply Christianity to everyday medical practice and how to compassionately ask questions about how God fit into the lives of our patients. At Pine Springs Ranch retreats, fellow students and attendings took personal interest in us, showing care and compassion, and forming life-long friendships. Another major blessing was a LLU nurse who introduced me to the Christian Orange County woman who has now been my wife for over 25 years. I was welcomed into the Seventh-day Adventist church and enjoyed spending Sabbaths with friends. And you can be sure I was especially careful to never miss chapel again, for obvious reasons!

Dr. Werner proudly remembers every ORU student passed their licensing exams the first time, and all matched residencies. Today, I have such gratitude to LLU—I am not sure I will ever finish giving back. Loma Linda saw me through medical school, residency, and opened the door to teaching; I still teach LLU psychiatry residents 25 years later. Today, I am a proud alumnus and member of the Alumni Association. I hope my story encourages fellow alumni to contribute not only financially, but to impact medical students through mentorship and instruction. The principles and mission of Loma Linda form a light that keeps shining in a world desperately needing whole-person medicine with the love of God practically applied.

Several years ago I lectured at APC and had the opportunity to reconnect with Dr. Behrens. She happily listened to my story about ORU. Holding back a few tears, I thanked her that 30 years prior, she took a chance on me as I sat on the floor, with a heart that still today remains full of hope for the future.

Photos below were generously made available by Karen V. Wells ’93, Jeffrey D. Ho ’92, and Myron C. Mariano ’92. They picture ORU transferees along with some of the LLU classmates they joined.

Dr. Kinback graduated from LLU in 1992, finished his psychiatry residency in 1996, served as an attending to 2000, and still serves as clinical faculty today. He is a pioneer in Transcranial Magnetic Stimulation (TMS) therapy in California and a founding member of the Clinical TMS Society. He runs a psychiatry group practice in Ladera Ranch, California.