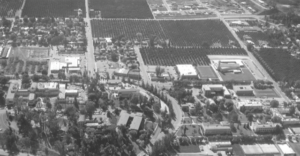 Pictured above is an aerial view of the College of Medical Evangelists campus circa 1956.

“The seventy-six acres of hill and valley land are well cultivated and will furnish much fruit and many vegetables for this institution. Fifteen acres of the valley land are alfalfa hay. Eight acres are in good bearing orange orchards. Many acres of land around the cottages and the main building are laid out in lawns, drives, and walks. There are horses and carriage, cows and poultry, farming implements and wagons. The buildings and grounds are abundantly supplied with excellent water.”1

Upon this land Ellen G. White described above, the founders of Loma Linda University built the first Loma Linda hospital. They erected the small building at the cost of $27,154.41 in a short amount of time in the most unlikely place: a cow pasture, “barn, and foul yard” where the “weeds and cockleburs grew.” With high expectations, the small, but short-lived, teaching hospital opened its doors on Monday, Dec. 1, 1913. Where that hospital once stood is now known as the basic sciences quadrangle. On Monday, March 20, 1929, the second Loma Linda hospital opened its doors to patients. This hospital, known as Nichol Hall today, was located on the crest of the hill, near the cottages and south of the sanitarium. Although it was larger than the first, expansion and remodeling during its 38-year history was necessitated by the ever-growing population in the surrounding communities.

In the early 1960s, the university board voted to build a new multi-story hospital. With a certificate of need in hand, groundbreaking ceremonies were held on June 7, 1964. The plans called for the hospital to be built on the orange orchard acreage, the last rural vestiges of this small sectarian campus. Soon, the hammer blows of progress echoed on the land of smudge pots, shallow-root irrigation channels, and orange blossoms.

The new Loma Linda Hospital opened on July 9, 1967, and three years later, on Aug. 20, 1970, it was renamed Loma Linda University Medical Center (LLUMC). Since its opening, LLUMC has expanded in stages. Additions include the Schuman Pavilion, the Children’s Hospital, the Proton Treatment Center, and the Wong Kerlee International Conference Center, with its east wing named the Chan Shun Pavilion Cancer Institute and the west wing called the Coleman Pavilion. During this expansion program, the Faculty Medical Clinics and Outpatient Surgery Center were constructed south of Barton Road.

Today, the campus buildings, old and new,  stand in tribute to the early day pioneers, visionaries of the early 20th century who were compelled to build upon this land a health care institution of the “highest order.” The new monolithic towers on the spacious Loma Linda University Health Dennis and Carol Troesh Campus rise above the iconic hill upon which the original college was founded. These towers that will soon open their doors, stand as a testament to the University Health Board, the organization’s leadership, the donors large and small, and the surrounding communities. They anticipated the needs of the future and built upon the foundations laid by others. Though the hospital locations on the campus proper have changed over the last 107 years, the institution’s hospital doors, whose mission is “to make man whole, ” have never closed. They have remained open to receive all who are “weary and burdened” and seek healing and rest.

Mr. Park is the consulting historian for the JOURNAL and former executive director of the Alumni Association. He produces www.docuvision2020.com and is the author of “The Mound City Chronicles: A Pictorial History of Loma Linda University 1905–2005.”